As seen on Channel 4’s Extraordinary Extensions, nnu house is the project of Humza and Pari, transforming an old and unattractive outbuilding into a modern, skylit rear extension. Beautiful in appearance and unique in the name, nnu House poses as a perfect transition between traditional and modern architecture.

Located in Essex, the nnu project takes the couple’s home and adds an uncompromising 21st century extension to the rear, creating a stark, though seamless contrast between period architecture and modern design.

Carried out by Studio Jayga Architects, a London-based team of architects and interior designers, the project is focused on creating a connection between the extension and the garden, demolishing the old outbuilding and utilising the space to create a split-level open plan building connected by internal steps. With the old building that obscured the look of the garden and reduced natural lighting, the new replacement draws in light while appearing stunningly modern and fitting to the garden, creating physical and visual contact between the kitchen and the outdoors.

The building showcases two arched doors as well as an up and over glass box window, creating a beautiful passage for natural light to elevate the space – also forming the unique name nnu house, inspired by the geometric shaping of the doors and windows when observed from the external facade. To the external cladding, the Japanese Shou Sugi Ban technique has been used on the wood, charring it for preservation while looking exceptional.

To the interior, Terrazzo tiles are a notable feature that are beautifully highlighted by a naturalistic colour scheme of sage green and muted beige, as well as an elliptical island that mirrors the smooth curves of the doors. The kitchen is finished off with the Lusso Elegance Pull Out Kitchen Mixer Tap in our signature brushed gold finish – a beautiful touch to this luxury kitchen.

What do you think of this project? Head over to our Instagram @lussostone and leave your comments and if you haven’t yet watched the episode, head over to Channel 4 for Extraordinary Extensions episode 3. 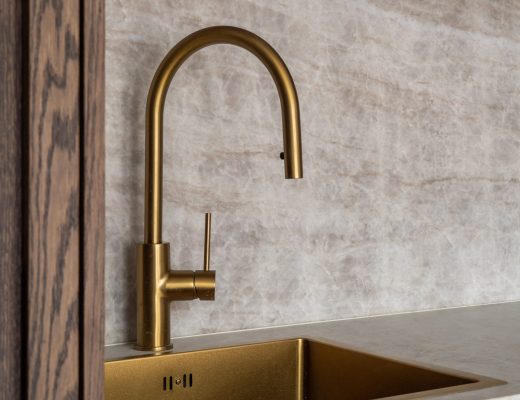 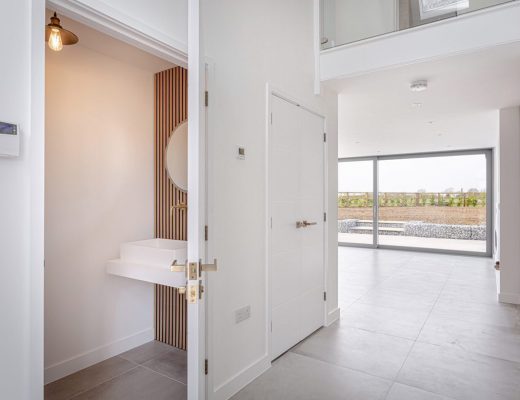